Paul Hodgson graduated from the Royal College of Art, London, in 2000 and has since fast gained attention for his large-scale photographs of theatrical tableaux vivants that often draw from the traditions of historical painting. He stages actors in period costume or contemporary clothing with operatic gesture, dramatic lighting and sparse settings against painted, photo or projected backdrops. Hodgson's allegorical pictures subvert the traditions they represent and disrupt their own implied narrative with a highly ambiguous effect. By reinterpreting paintings from the past with the vernacular of current studio photography he nods to certain old masters, but updates their work with the signs of contemporary social life.

Hodgson uses the elements of 'classical' language as a means to enter into his photographs and as suggestive metaphors, yet the scenes are not necessarily meant to evoke sympathy or compassion, nor are they meant to confirm stereotypes. He is more concerned with presenting a picture on a personal level. The results are curiously provocative, awakening forgotten memories and poised somewhere between irony and genuine emotion. 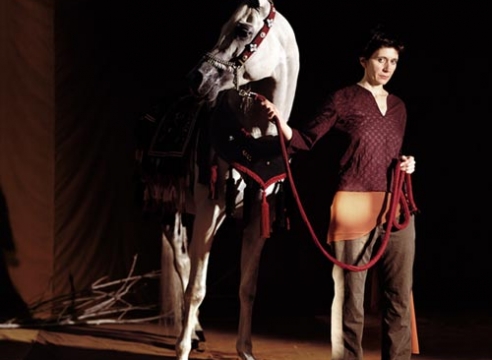