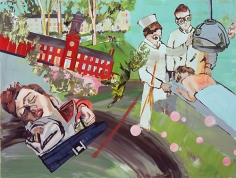 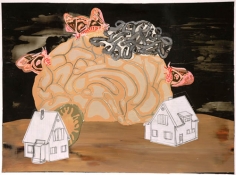 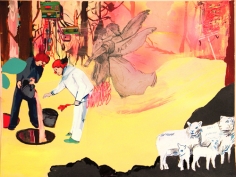 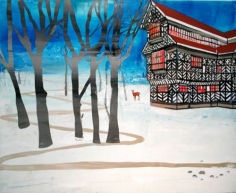 Elizabeth Huey's paintings are inspired by her research into American asylums of the 19th century and fueled by her personal experiences. Thomas Story Kirkbride was a key innovator of the science of psychiatry in the United States. Acting on a belief in the restorative effects of bucolic, edifying surroundings, Kirkbride developed a moralized set of blueprints for hospitals extending the concept of architecture as antidote for the mentally ill. His enlightened architectural legacy, along with the legislative efforts of social reformers like Dorothea Dix, set the standard for asylum construction and implementation in the 19th century.

Huey's latest series excavates the imagery of what were, in essence, alternate towns. In the spirit of Kirkbride, picture planes become active sites of social and environmental interaction and discovery. The populations viewed therein participate in communal and individual experimentations - indistinguishable figures huddle in groups; exposed pairs exchange intimate caresses and lone individuals are subjected to aggressive therapies that ravage the body in an effort to preserve the mind. Medical practitioners and patients wander the grandiose grounds of her paintings seeking some form of a cure.

Huey depicts treatments that manipulate both body and mind, calling into question not only their effectiveness, but also, their proposed ethicality. The juxtaposition of violence and care is reflected in the paint handling. This visualized challenge to the ameliorative powers of an antiquated mental health care system complements Huey's ongoing insights into issues of vulnerability and control. As in previous works, there is a heightened sense of tension between the myriad forces that act on the minds and perceptions of each protagonist. Religious archetypes and convoluted contraptions, ubiquitous institutions and deluded doctors exert their influence upon the psyche, with benevolence and malevolence.