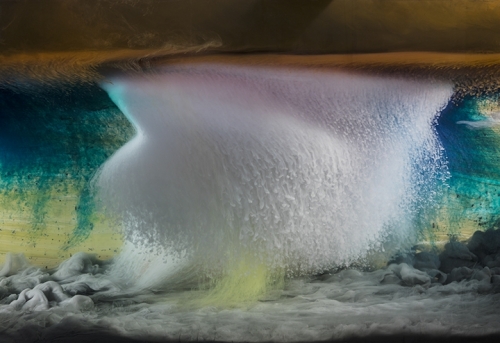 Weather Report will reveal the sky as a site where the aesthetic, the romantic, the political, the social, and the scientific co-exist and inform one another. The depiction of weather phenomena in the visual arts is traditionally linked with either landscape painting or photography, but in the last two decades artists have increasingly turned to other media to explore weather and, by extension, the larger subject of the Earth’s atmosphere.

The depiction of weather in the visual arts is traditionally linked with either landscape painting or photography, but in the last several decades artists have increasingly turned to other media to explore weather and, by extension, the larger subject of the Earth’s atmosphere. Weather Report presents a group of diverse international artists who reference weather in provocative ways through sculpture, drawing, painting, installation, and video. The exhibition will be on view at The Aldrich Contemporary Art Museum October 6, 2019, to March 29, 2020.

The thin veneer of gas and water vapor that makes life possible on Earth is a remarkable and generally underappreciated element of our planet; it not only creates hospitable conditions for life, but also consistently inspires the human imagination. Works of art within the Museum will manifest phenomena such as clouds, wind, rain, snow, temperature extremes, storms, and seasonality, while others approach subjects that include the emotional effects of weather, weather as a metaphor for turmoil and change (both on a societal and personal level), climate change, weather’s impact on history and politics, weather forecasting, and the relationship between the atmosphere and biological processes. Weather Report reveals the sky as a site where the romantic, the political, the social, and the scientific co-exist and inform one other.

Nancy Graves, one of the first artists to interpret weather conditions from satellite imagery, began using this new technology in the 1970s. Graves’ Untitled (Heat Density Map of a Cyclone) (1974) draws inspiration from an infrared satellite photograph found in a NASA technical publication. Beautiful as well as ominous, Nick Cave’s Tondo (2018) posits the violence of urban America as a storm, superimposing mapping of cataclysmic weather patterns onto brain scans of black youth suffering from PTSD as a result of gun violence. Storm Prototype (2007) is one of a series of sculptures by Iñigo Manglano-Ovalle that physically realizes models of super cell thunderstorm clouds. The two “clouds” that comprise this work are objects created from 3-D computer models of thunderstorms, capturing the development of a single storm in two snapshots sixty seconds apart.

Weather Report will feature programming partnerships with both regional and national meteorology and climate experts, as well as university meteorological departments, including Albert Owino and Gary Lessor, meteorology professors at Western Connecticut State University, and Amanda Bunce, a member of the Stormwise group and wind researcher at the University of Connecticut.